Windows 8 Announced !Yes its true that Tami announced that more than 630 million Windows 7 licenses have been sold to date.But new Windows is about to be launched in August. Windows 8 was announced.At the Microsoft Worldwide Partner Conference, Windows Chief Marketing Officer & the Chief Financial Officer Tami Reller told thousands of partners from all around the world that Windows 8 will be released in first week of August.Release to Manufacturing (RTM) is expected to be the first week of August.

Up till now best selling Windows OS was Windows seven with 630 Million Licenses sold. We expect windows 8 to be a more legendary OS.

What about Anti Virus?

Yes kaspersky has launched an antivirus version for Windows 8.Check it out 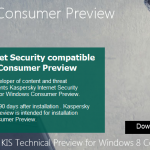 Hey Ahmad,
You’re nowadays working very well, keep the work up, and also share some Cool Plugins for WordPress. I’m currently using Windows XP, and will never change it even, Others windows have more Great Features.